Organisation and Operation of our Garden

The Earl’s Court Square Garden is one of the 37 Garden Squares in the Royal Borough of Kensington and Chelsea administered under the provisions of The Kensington Improvement Act 1851 (The 1851 Act).
Much of the information in this section has been taken from the RBKC website including legal guidance from Cripps Pemberton Greenish for Garden Committees.

Those people who have the right to use the garden enclosure (although the Garden Committee may by resolution allow others to use it).

• The Garden Committee can appoint a Sub-committee to manage the Garden on a day-to-day basis, as is the case with Earl's Court Square Garden.
• The Sub-committee must consist of between three to nine Garden Charge-payers. Scroll down to see who we are.

• The Treasurer’s Report to the AGM details all expenditure incurred during a financial year running from 1 December to 30 November.
• The Garden Charge money (precept) is restricted by the 1851 Act to use for the maintenance and improvement of the garden including keeping it "enclosed, laid out, fenced, planted, gravelled, maintained, repaired and embellished". It would appear that the intention was therefore to be wide ranging to cover all expenses normally incurred in the maintenance of a garden at that time, and applied to contemporary conditions thus is taken to include e.g. lighting equipment and electricity, key access systems, seating etc.
• Income received from Garden Subscribers (residents of Earls Court Square granted discretionary access to the garden who are not Garden Charge-payers) is unrestricted by statute and thus enables money to be spent occasionally on items such as musicians on garden open days which otherwise may fall outside the scope of the 1851 Act.
• The annual budget is presented at the AGM as part of the Garden Charge proposal which is then presented to the council for approval. RBKC collect the appropriate charge from Garden Charge-payers alongside their council tax before passing the funds back to the Committee.
• Major expenditures such as tree pruning, maintenance of the paths, lighting, irrigation, the play area, etc are outlined at the AGM. Reserves are accrued over several years to even out wide swings in expenditure and maintain a predictable level of Garden Charge.
• We believe that the Earl’s Court Square Garden represents excellent value for the residents. You can find the Council’s Garden Expenditure League Tables here. Look at the column headed Garden Charge Band D and you will see that Earl’s Court Square has one of the lowest per household garden levies in the entire Borough. 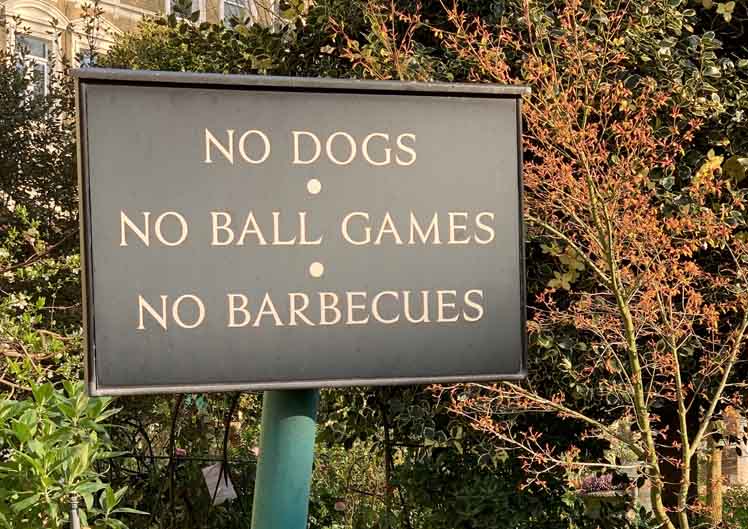 • Garden Committee members, acting through their Sub-committee, are able to make byelaws for the proper management of the garden under their care.
• Our garden byelaws, having had the Court’s approval, are enforceable. This means that a breach of the byelaws may be prosecuted in the criminal courts, resulting in a court conviction, criminal record and a fine.